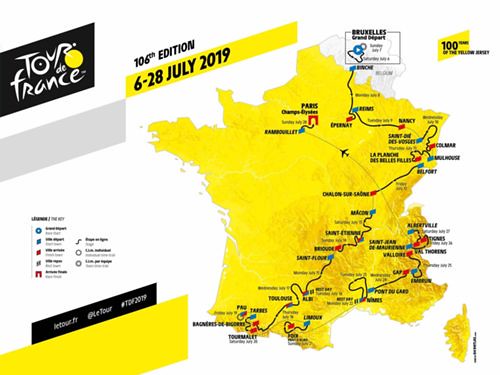 The 100th anniversary of the yellow jersey will be celebrated on 19 July. Throughout the race, an individual jersey design will be issued for each day’s race leader.

The race will be visiting Binche, Saint-Dié-des-Vosges and Pont du Gard for the first time as stage cities. The route will contain five mountain-top finishes, with the first coming on stage 6 to La Planche des Belles Filles. The other mountain-top finishes follow on stages 14 (on top of the Col du Tourmalet), 15, 19, and on stage 20, the penultimate day, at Val Thorens. The Col de l’Iseran, the highest paved pass in Europe, will feature on Stage 19. This will be the seventh time that the Tour climbs the 2,770 m (9,090 ft) Col de l’Iseran, but only the second ascent from the more difficult southern side.