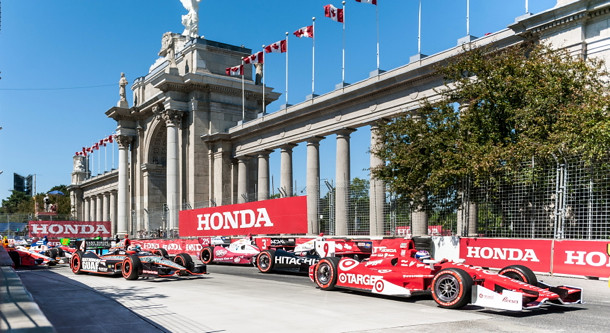 Driving the No. 2 DeVilbiss Team Penske Chevrolet, Newgarden won by 1.8704 seconds over Alexander Rossi to pick up his fifth career win and second of the season. Hometown favorite James Hinchcliffe finished third for the second straight year at Toronto.

Newgarden made his first pit stop on Lap 23 just as Tony Kanaan was sliding into the tire barrier in Turn 1. The ensuing full-course caution allowed Newgarden to take the lead when other front-runners pitted under yellow.

Newgarden went on to lead 58 of the 85 laps. Though he didn’t lead a lap, Rossi drove to his best Verizon IndyCar Series finish since winning the 2016 Indianapolis 500.

Points leader Scott Dixon of Chip Ganassi Racing collided with Team Penske’s Will Power on the opening lap, flattening the left rear tire on Dixon’s No. 9 NTT Data Honda. While he was able to continue, Dixon finished in 10th place and saw his points lead unofficially dwindle to three points over Helio Castroneves.

Castroneves made a brilliant inside pass heading into Turn 1 on the opening lap to get past pole sitter Simon Pagenaud and Graham Rahal for the lead. Castroneves led the first 24 laps before the Kanaan incident brought out the caution flag. The driver of the No. 3 Hitachi Team Penske Chevrolet, who won last week’s Iowa Corn 300, finished eighth to tighten the championship battle with five races remaining.

Marco Andretti finished fourth in the No. 27 Andretti Autosport Honda, his best showing since a third-place finish at Auto Club Speedway in June 2015.

An encore telecast of the Honda Indy Toronto airs at 7 p.m. ET today on NBCSN.

The next Verizon IndyCar Series race is the Honda Indy 200 at Mid-Ohio Sports Car Course on July 30. It airs live at 3 p.m. ET on CNBC and the Advance Auto Parts INDYCAR Radio Network with a re-air at 7 p.m. the same day.