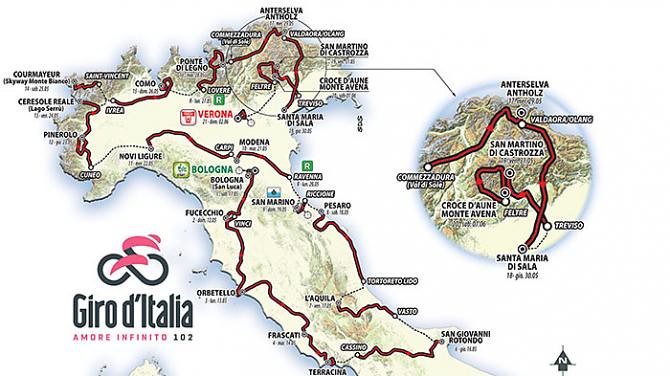 Main article: List of teams and cyclists in the 2019 Giro d’Italia

All 18 UCI WorldTeams were automatically invited and were obliged to attend the race. Four wildcard UCI Professional Continental teams were also selected. Because of an agreement between RCS Sport and the organisers of the Coppa Italia di ciclismo (the Italian Road Cycling Cup) one of the four wildcards is traditionally reserved for the overall cup winner. One of the wildcards was therefore awarded to Androni Giocattoli–Sidermec. On 25 January 2019, the race organisers announced that the other three wildcards were awarded to Bardiani–CSF, Israel Cycling Academy and Nippo–Vini Fantini–Faizanè. All of the wildcard teams had previously participated in the Giro, and three out of the four teams participated in the previous year. The one exception was Nippo-Vini Fantini, whose last participation in the Giro was in 2016. Each team started with eight riders. The on-stage presentation of the teams took place in Bologna on 9 May, two days before the opening stage.

The teams entering the race were:

The race started on 11 May with an 8 km cronoscalata, a mountain time trial, in Bologna. The stage concluded with a 2.1 km climb to the Sanctuary of the Madonna di San Luca. The steep (average gradient 9.7%) climb, which is regularly used as a finish in the Italian autumn classic Giro dell’Emilia, made its debut in the Giro in 1956 in a time trial stage won by Charly Gaul, and had now made its fourth appearance in the Giro.

The race is then planned to head south, with the 2nd stage crossing the Apennines into Tuscany honoring the Tuscan cyclist Gino Bartali, with a stage finish in Fucecchio. The following stage will start in Vinci, celebrating the 500th anniversary of the death of Leonardo da Vinci, and finish in Orbetello which will also act as the start location for the following stage, where the race will leave Tuscany for the Lazio region with a stage finish in Frascati. Continuing south, the peloton will then leave Frascati for a stage finish in Terracina. Following a short transfer to Cassino, the race is then to cross the country on a hilly stage to the Apulian region on eastern coast, finishing in the town of San Giovanni Rotondo. The race will then head north, with stage finishes in L’Aquila and Pesaro.

With the exception of the opening stage, the first part of the race is considered to be dominated by the sprinters and potential breakaways. The battle for the overall win is expected to start during stage nine’s individual time trial in San Marino. The stage in San Marino will be the last stage before the rest day, and the only occasion this edition of the Giro leaves Italy.

Following the rest day on 20 May, the riders will tackle two flat stages with finishes in Modena and Novi Ligure.

The race is scheduled to finish with a 17 km time trial in Verona on 2 June.

The first stage, an 8 km mountain time trial, was won by Primož Roglič (Team Jumbo–Visma) who therefore became the first wearer of the maglia rosa, the pink jersey identifying the leader of the general classification. Roglič also took the lead in the points classification. Giulio Ciccone (Trek–Segafredo) took the lead in the mountains classification and became the first wearer of the blue jersey, while Miguel Angel Lopez (Astana) finished as the fastest young rider and became the leader of the young rider classification. Stage 2, the first bunch sprint stage, was taken by Pascal Ackermann (Bora–Hansgrohe), who benefited from a mistake by Elia Viviani (Deceuninck–Quick-Step) in the setup for the sprint. Roglič held the maglia rosa for another day, while Ackermann took the points classification. Ciccone also went into the breakaway and maintained his KOM standing. The third stage was once again a group sprint, but this one had much more controversy. In the leadup to the sprint, Elia Viviani (Deceuninck–Quick-Step) pulled out of line and bumped Matteo Moschetti(Trek–Segafredo) out of the way. Viviani won the stage, but judges later relegated him for an illegal sprint, which handed the win and points classification to Fernando Gaviria (UAE Team Emirates). No other changes in the jerseys occurred.. Richard Carapaz (Movistar Team) won the fourth stage after a late attack. Multiple crashes with only a few kilometers left of the stage saw several riders go down. One of those affected was favorite Tom Dumoulin (Team Sunweb), who eventually finished the stage four minutes after many other favorites had crossed the line. Roglič extended his general classification lead out to 35 seconds, and Ackermann took back the points classification.