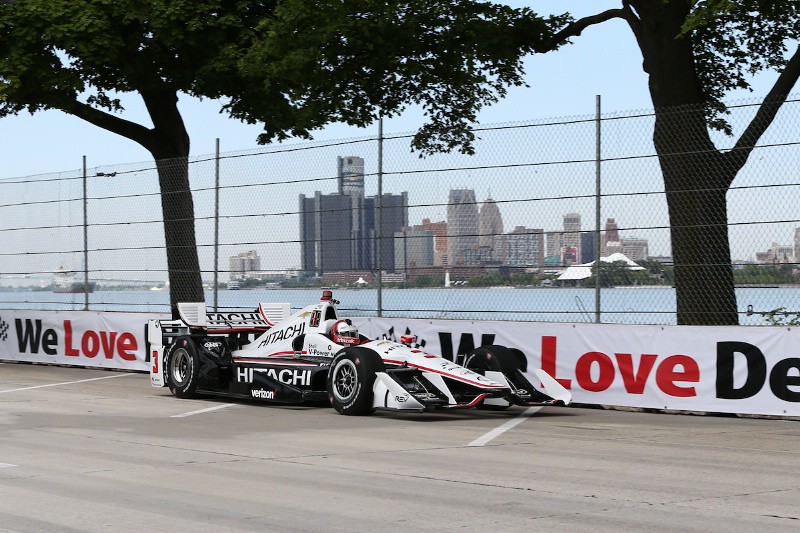 DETROIT (Saturday, June 3, 2017) – Graham Rahal said at the beginning of the Chevrolet Detroit Grand Prix presented by Lear weekend that his team had uncovered a solid street-course car setup earlier this season. The Rahal Letterman Lanigan Racing driver proved it today with a dominant victory in the first race of the Verizon IndyCar Series weekend doubleheader.

Rahal led 55 of the 70 laps on the Raceway at Belle Isle Park’s 2.35-mile, 14-turn temporary street circuit. The 28-year-old Ohioan crossed the finish line 6.1474 seconds ahead of Scott Dixon to become the seventh different driver to win in as many series races this season. The second race of the Chevrolet Detroit Grand Prix is scheduled for Sunday.

“Everything went according to plan today,” said Rahal, who started from the pole position after capturing the Verizon P1 Award with a track-record lap this morning. “We were pretty in control.

“We’ve shown some speed at times this year, but we haven’t had a lot of luck. Today, we had a combination of speed, the yellows didn’t come out at bad times for us and we certainly had the pace. Pretty pleased with that and hopefully tomorrow we can do the same.”

Driving the No. 15 SoldierStrong / TurnsforTroops.com Honda, Rahal collected the fifth win of his 11-year Indy car career. It is Rahal’s first triumph on a temporary street course since his maiden Verizon IndyCar Series victory at St. Petersburg in 2008, when he became the youngest winner in Indy car annals at 19 years, 3 months, 2 days.

It is also the first street-course victory by the Rahal team since co-owner Bobby Rahal won the inaugural Belle Isle race 25 years ago.

“If you give Graham the car, he’s going to be tough to beat. I think we saw that today. I don’t think he could have driven any better, I don’t think a statement could be made any stronger. This was our race.”

Dixon persevered to finish second despite a painful left ankle, the result of his spectacular crash during the May 28 running of the Indianapolis 500. It is the 93rd career podium for the four-time series champion, breaking a tie with retired teammate and friend Dario Franchitti for fifth all-time. It is also his 36th career second-place finish, moving Dixon within one of tying Bobby Rahal for third all-time.

“It was a tough race no matter what,” said Dixon, the driver of the No. 9 Camping World Honda who reclaimed the points lead by two over Helio Castroneves. “Physically for me it was tougher than normal. I think I was favoring a lot of things, but just so proud of the whole Camping World crew. They did an amazing job. The car was fast. I probably couldn’t get the most out of it but we were kind of there. But it’s great for points.”

Schmidt Peterson Motorsports driver James Hinchcliffe recovered from a spin on the opening lap to go off strategy and finish third in the No. 5 Arrow Honda.

“Tires are the name of the game here,” Hinchcliffe said. “To be able to get off the (Firestone alternate) reds after the spin in the first turn there played to our advantage.

“Then we got that yellow at the right time right after our (Lap 25 pit) stop. It put us up where we belonged and I think we showed that the No. 5 Arrow car had a lot of pace. To come back from that; the boys were great in the pits and really happy to grab a podium here today.”

One thought on “Indycar 2017 Round 7 CHEVROLET DETROIT Race 1”