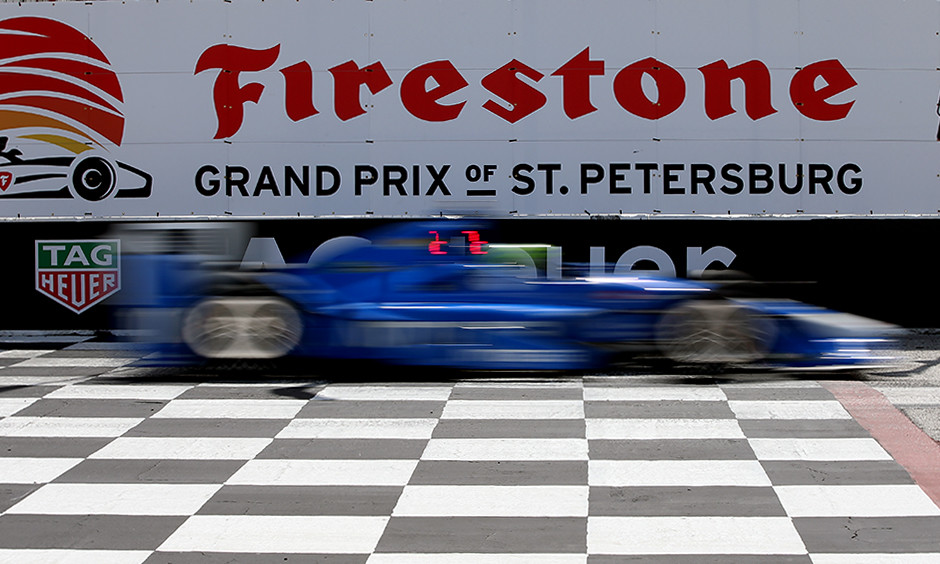 ST. PETERSBURG, Florida – Few reunions have better after-parties than the one that will be enjoyed by Sebastien Bourdais and the Dale Coyne Racing crew.

After a six-year split from the Illinois-based outfit and 10 years since he last raced with Craig Hampson as his engineer, Bourdais claimed victory at the Firestone Grand Prix of St. Petersburg that opened the 2017 Verizon IndyCar Series season today. Bourdais, driver of the No. 18 Dale Coyne Racing Honda, assumed the lead on Lap 37 and remained in front of the field for all but five of the subsequent 73 laps to pick up his 36th career win – breaking a tie with Bobby Unser for sixth all-time.

The victory was all the more celebration-worthy because it came just a day after Bourdais crashed in qualifying, which relegated him to the 21st and last starting position for today’s race.

“I need to give these guys a big hug,” said Bourdais, who resides in St. Petersburg, as he celebrated with his crew in victory lane. “Honestly, I’m a little speechless. We had a miserable day yesterday and that was all me, and today we turned it into a great day.”

Several crew members from the No. 18 entry, including Hampson, were part of the Newman/Haas Racing team that earned four consecutive CART championships with Bourdais from 2004-07.

“This was probably the hardest race to recover,” said Bourdais. “It’s really hard to pass. Every time we come here and it looks like we have a reasonable car. It was looking like a pretty good car and I just threw it away (in qualifying). I just really didn’t know what to do with myself. To turn that from yesterday into today, I just don’t know what to say except thank you to the guys.”

For Dale Coyne, the victory is his fifth as a team owner in 33 years. The last team win came in 2014 when Carlos Huertas won the first race of the doubleheader at Houston.

“It’s like getting the old band back together, so to speak, with a lot of the Newman/Haas guys, and it’s worked out, actually pretty good,” said Coyne, whose day was further sweetened when his second driver, rookie Ed Jones, scored a 10th-place finish in his Verizon IndyCar Series debut. “We took some bad luck (Saturday), started in the back, used some strategy to get him up front, but then he dominated the front when he was up there.

“We were all disappointed, Coyne said of Saturday’s incident that put Bourdais at the back of the field. “You work hard to get here, those things happen. That’s part of racing. We sat there wondering, we’ve still got a 30 percent chance to win this race because we can go on alternate strategy. Chance of catching a lucky yellow, about 30 percent. We caught it right away

“Obviously when he got in the front, he took command of the front of the field. We did our part; he did his part. It worked out perfect.”

“I want to congratulate Sebastien,” said Pagenaud. “It’s tremendous what he did today. Dale Coyne team, what a great job. Honestly, he was untouchable, he was very strong.”

After failing to advance through the first segment of road/street course qualifying for the first time since 2015, Pagenaud’s runner-up finish after starting 14th was a welcome result to end a frustrating weekend.

“Yeah, it was a difficult weekend,” said Pagenaud, who also finished runner-up at St. Pete in 2016 before going on to win the championship. “Certainly one of the most difficult we had in a long time. Hopefully it’s our good luck charm.”

But for Bourdais, the win was an opportunity to erase sour memories of his first Indy car race – on the same St. Petersburg track – where victory slipped from his grasp.

“I caught myself thinking about 2

“It was kind of redemption day here. To come out on top with obviously a lot of friends and family on-site, the whole community supporting the effort, it was just a great feeling.”

Including the last four races of the 2007 Champ Car World Series season, Bourdais and Hampson have won five of their last six races together and three in a row. The duo will look to extend that winning streak next month at the Toyota Grand Prix of Long Beach.